The healthcare sector in Saudi Arabia has witnessed continued growth on the back of rising investments from both the government and the private sector. A rapidly-increasing population and high percentage of diseases caused by sedentary lifestyle are driving the need for healthcare in the country. Rising insurance penetration is also encouraging more visits to healthcare facilitators among the population. In 2013, the Saudi government spent close to
$ 24 billion (3.2% of GDP) on healthcare. It is expected that the Saudi healthcare market will see a phenomenal CAGR (2014-19) of 20% over the next five years.

The Saudi government is the major funds-provider to the healthcare sector. It channels these funds either directly to its own Ministry of Health (MOH) hospitals or indirectly through subsidies to private health institutions. The MOH owns and operates the majority (70%) of the Saudi hospitals. Saudi nationals and people visiting Mecca for the hajj pilgrimage are entitled to free healthcare in these hospitals. Approximately 76% of the 59,500 healthcare professionals (est. 2013) in the MOH facilities are Saudi nationals.

Physiotherapy is a special segment of healthcare, which deals with the treatment of diseases, injuries, and deformities through methods such as massages, exercises, heat treatment, etc. rather than administration of drugs or surgery. Typically, as an economy progresses the demand for physiotherapy increases. This is because the development of the economy leads to numerous other developments such as increase in life expectancy of people, rise in sporting activities in the country, and rising incidences of lifestyle-related diseases. Saudi Arabia is currently going through such a phase where a booming sports industry, ageing population, and rise in disability are fueling a strong demand for physiotherapy. 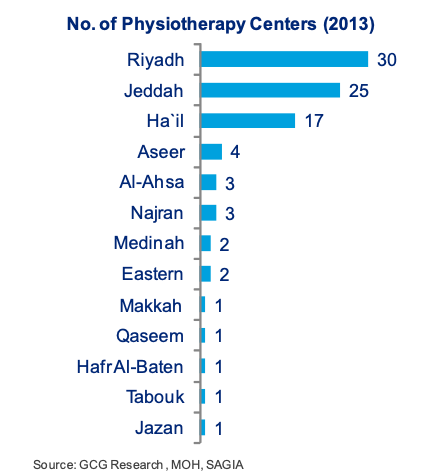 Riyadh has the highest treated physiotherapy patients at 110,000 in the MOH hospitals, followed by the Eastern Region at 108,000 and Makkah at 87,000. King Khalid University Hospital (KKUH) and King Abdul-Aziz University Hospital (KAUH), the two major rehabilitation outpatient service providers in Riyadh, specialize in physiotherapy. The rehabilitation departments of these hospitals consist of the rehabilitation medicine clinic, physical therapy, occupational therapy, communication disorders, orthotics and prosthetic, nutrition, psychology, and social services. They operate on a referral system used by physicians from different departments within the hospital.

Riyadh, Jeddah and Ha’il shared almost 80% of private physiotherapy facilities in the country among themselves (est. 2013). The Kingdom has very limited high-end hospitals, and hence the competition in the high-end healthcare facility segment is very low. At the same time, the MOH hospitals are burdened by the rising number of patients and increasing healthcare requirements of the country’s burgeoning population. This leaves ample space for the private healthcare sector to grow too as it will take years for the market to saturate given the gradual growth in the sector.

Boom in the KSA sports segment:  The KSA sports sector is seeing growth at over 40% per year backed by major government initiatives to promote sports. The Saudi government has pushed the promotion of sports, and removed restrictions in women’s sports, leading to a boom in women’s fitness. Contact sports such as football, widely practiced in Saudi Arabia, have a high propensity to result in sports-related injuries requiring physiotherapist intervention.

Ageing population on the rise: The KSA has witnessed an increase in the life expectancy rate, which has increased to 75.3 years in 2011 from 72.6 years in 2000, revealing a trend towards an ageing population. The requirement for physiotherapy is high among this age group.

Lifestyle-related diseases: In Saudi Arabia, disability incidences are increasing with rapid increase in “diseases of civilization”, which include obesity, cardiovascular disease, and diabetes. Furthermore, the escalating rate of road traffic accidents is accompanied by a high increase in people with disability. Besides, reasons such as burgeoning population, change in lifestyle leading to greater incidence of diabetes mellitus, cardiovascular diseases, increased road traffic accidents leading to head injury, stroke, spinal cord injury, etc. lead to a greater requirement for rehabilitation services.

The physiotherapy market has made remarkable progress in Saudi Arabia.  We believe that this growth will continue given the fundamental demand drivers for physiotherapy being firmly ingrained in the Kingdom. The prospects for the private sector in physiotherapy are especially high. This is because the number of government hospitals is inadequate to meet the rising demand for physiotherapy from the increasing population. This is generating a huge opportunity for private multidisciplinary and specialized clinics who deal with complex healthcare services including rehabilitation (physiotherapy) services.

Any cookies that may not be particularly necessary for the website to function and is used specifically to collect user personal data via analytics, ads, other embedded contents are termed as non-necessary cookies. It is mandatory to procure user consent prior to running these cookies on your website.