The Gulf food festival invites food connoisseurs from across the world to enjoy the unique flavors and meat specialties. The new league of the urban dwellers in the UAE is keen on trying new brands and concepts reflecting its social status. Thus, food consumption pattern is shifting from traditional Arabic cuisine to a more international one, ranging from Japanese (sushi) to Indonesian, Italian, and Lebanese. Therefore, in the UAE, the most popular yet unconventional mode of entertainment is to eat delectable food. This has led the chicken, turkey and seafood market (i.e., the value-added proteins segment) in the UAE to be seen as one of the most enticing opportunity grounds for diversification on account of high demand. The UAE’s GDP per capita for 2014 was US$25,772.83, which positioned it among the higher ranks of wealthy nations in the world. This high purchasing power enables people to spend lavishly on food, thereby boosting demand and making this country the second-largest producer and consumer in the GCC food market.

Some of the strongest factors contributing to high demand for food are high per capita income, a vibrant tourism sector, a high rate of urbanization, and growth in the hotel, restaurants and catering sector. This has 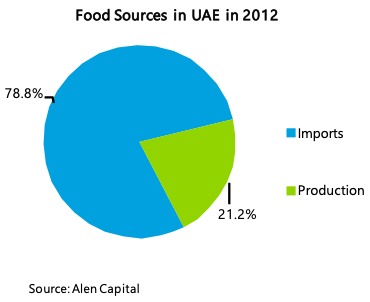 created a plethora of opportunities leading to a boom in the sector owing to the enhanced scope for injecting investments. On the flip side, owing to the arid weather and infertile land conditions, the cultivation and food production landscape is unfavorable; thus, only 21% of the country’s food requirements are met through local production, while the rest 79% is imported. Demand in the value-added protein market is on a rise and, therefore, the market for foods such as turkey, chicken, and seafood is forecasted to record a CAGR of 4.8% during 2012–2017. The UAE’s strategic location and strong import logistics enable it to further lead the food processing sector in the GCC.

A cultural shift in the consumption patterns of the gulf food market has been well adopted by the UAE as well. Moreover, the impact of the huge influx of expats from South Asia and Europe is reflected in the way the perception of the UAE residents is changing towards the eating culture, bolstered by wealth, and growing brand consciousness. In 2012, the Quick Serving Restaurants (QSRs) segment was the largest in the UAE among all GCC economies, with a market size of USD9.5 billion, followed by full-service restaurants with USD5.3 billion market share. Over time, brands such as McDonald’s, Subway, Burger King, and TGI Friday’s, among others have gained popularity in the UAE, leading to high demand levels in the QSR segment. Besides that, factors like rising tourism, phenomenal growth of HORECA (Hotel, Restaurants and Catering), and the growing trend of casual dining and cafeterias have been aiding the rising demand, thereby providing the scope for higher production.

Influenced by the eating trend in the western countries, the UAE is experiencing a shift towards preference for protein-rich diet that includes meat and dairy products from a carbohydrate-based one that consists of staple food items such as cereals. Health foods are also gaining market traction owing to the rising awareness towards healthy living and the frequent incidence of diseases. Chicken accounts for 65% of the total meat supply in the country, and poultry consumption per capita has grown substantially from an estimated 30 kg in 1979 to 44 kg per capita in 2011. Assorted chicken varieties are available, ranging from frozen, chilled and value-added. Yas Farm is a dominant supplier of whole turkey in the UAE. Some of the suppliers raise organic turkey, which increasingly witnessing higher demand and is sold about AED 240 per turkey. 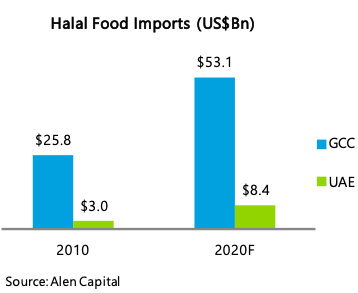 The halal food market is seen as an integral segment of the UAE food industry; therefore, considering the rising demand, the UAE is trying to establish itself as a major hub for halal foods in the GCC region. Rising demand for the halal food market in the UAE would lead the imports to grow at 11% from 2010 to 15.8% in 2020. But factors like low profitability, the risk of bird flu from imports, and the lack of government support pose threats to the poultry market. 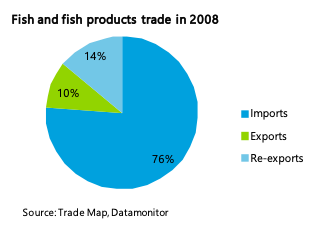 aquaculture projects owing to high demand for seafood. The UAE has rapidly emerged as one of the top destinations for premium seafood products owing to the unique combination of demographics, economic growth, and tourism. About 98% of the shrimp and prawn imports have recorded a remarkable CAGR of 33% between 2010 and 2014. This escalation in demand is in turn supporting the trade, which is leading to the economic development of the UAE. 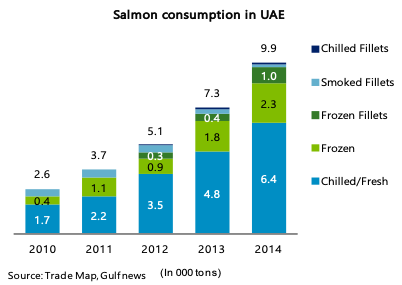 Since 2010, salmon consumption increased remarkably among the UAE nationals as well as tourists. Mackerel, cuttle, tuna and cod are also among the famous varieties of fishes garnering strong demand.

Future of the food market – Will it taste the same?

Based on IMF data, the UAE’s population is expected to rise at a CAGR of 2.9% and tourism is projected to witness a CAGR of 5.3% during 2012–2017. Although a host of expansion opportunities are open to the UAE, it faces the challenges of high import dependence, inadequate water supply, and poor import logistics. 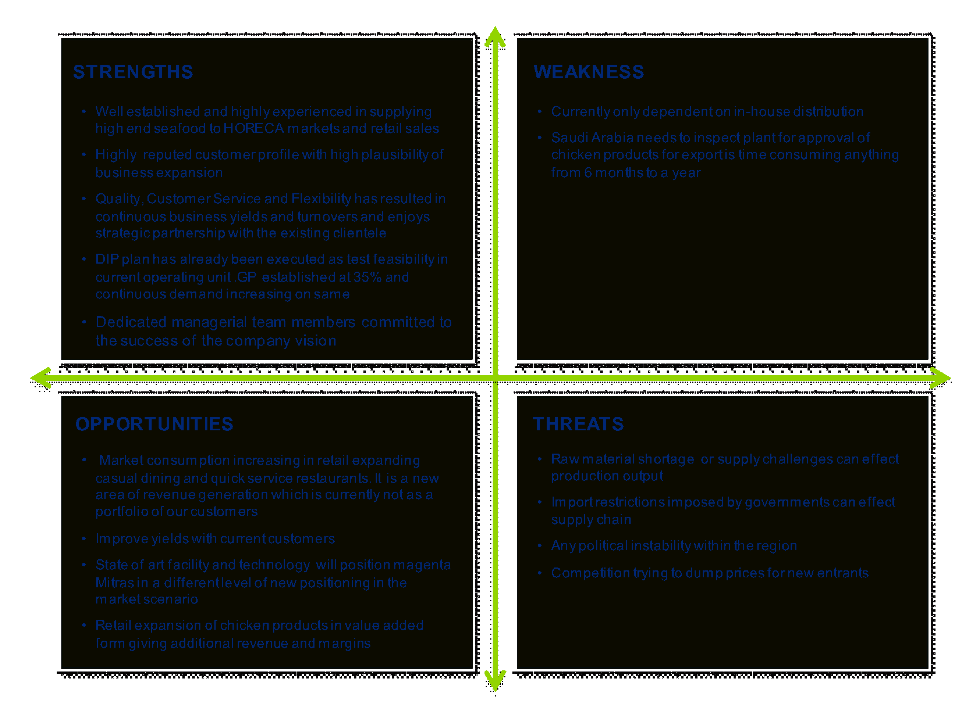 Key growth drivers in the UAE’s value-added protein market are:

HORECA: According to the Department of Tourism and Commerce Marketing, by 2016, Dubai is expected to add 139 HORECA properties, including 91 hotels and 48 hotel apartments, to the current supply of 630 establishments.

Casual Dining: Dinning out has become a regular activity for many residents, who spend an average of AED 841 on restaurant meals per month, the highest in the Middle East.

Coffee Shops: According to the International Coffee Organization, UAE residents currently consume an average 3.5 kg of coffee per year, nearly double that in other Gulf countries. This stimulates the demand for snacking meals as well.

Retail: Food retail sales in the GCC nations are expected to grow at a 7.7% CAGR between 2013 and 2018. Hypermarkets, supermarkets and other organized retail formats offer one-stop-shop that meets the variety of requirement through assorted food offerings.

Major Food Re-exporter Destination: The UAE and Saudi Arabia have emerged as a major food re-exporting hub and owing to the commendable strides in the food sector UAE has become the world’s third largest re-exporter of food.

Tourism: International tourist arrivals in the GCC are forecast to grow at 7.7% CAGR between 2013 and 2018 to 45.7 million. The UAE and Saudi welcome more than 25 million tourists per year on average, for business and leisure.

Changing Consumption Habits: Due to rapid urbanization, which includes the influx of expats, the UAE is witnessing a drift from the traditional eating habits towards a more conscious approach of eating protein-rich foods. Several web portals are now offering online food delivery in the UAE, including foodonclick.com, otlob.com, talabat.com, and hellofood.com, thereby promoting consumption.

Consumer spending on food in the GCC region is expected to reach $106 billion in the five years starting from 2013, and about 19,000 new food and beverage outlets are expected to open in the UAE by 2019, adding to the current count of 6021 outlets. Currently, the UAE’s food sector is demand-driven, and is yet to build up huge capabilities in terms of supply management and logistics expansion in order to seek a balanced growth and extract maximum potential. Today, it is evident that the UAE’s food industry is heavily dependent on imports to cater to the voluminous demand; this could make it vulnerable in the future. However, there lies tremendous strength in the GDP value that the industry is harnessing, aided by strong current and anticipated demand. This is a source of a great comfort for prospective investors, as the upward trending food industry in the UAE would throw open big opportunities for them.