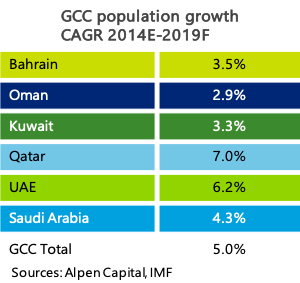 The government in the GCC (Gulf Conglomerate Corporation) countries has been pursuing economic diversification through increased spending on the strategic sectors like infrastructure, education, construction, tourism, and health to reduce its reliance on imports. This diversification has been fueling the GCC economic growth, which is expected to rise at a CAGR of 5% from 2014 to 2019. This, in turn, has been leading to the increased demand in the food market (fresh mutton and fruits), which is being supported by an increasing health consciousness and change in the consumption pattern of the Gulf countries. In the UAE, the current population is 9.8 Million, which is a mix of the UAE citizens and expats from about 200 countries who have brought along their native food products and habits, thereby giving boost to the food industry in the UAE.

During 2006-12, the food production CAGR in the GCC countries declined by 1.5%, due to unfavorable land and climatic conditions, but fruits were the highest produced agri-food in 2012. In the UAE, food consumption is expected to increase at a CAGR of 4.8% as against the GCC CAGR of 3.5%. The per capita income in the UAE as of 2014 was US$ 44700, which ranked it among the wealthiest GCC countries. This has become the prime reasons for the growth in overall food consumption in the country.

Driver for the UAE Food Market 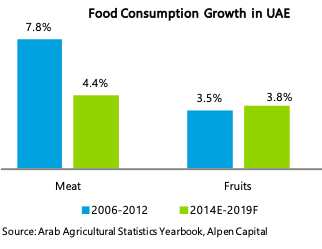 The UAE is a major re-export hub, and hence a highly active food re-export market has also been attributed as one of the reasons for the increasing attractiveness of the fruits and meat market. Besides that, the robust growth in the tourism sector, increasing urbanization, rising population, and support to local food processing companies have become the drivers for the UAE food industry. According to the Government of Ras Al Khaimah, since 1994, the UAE government has spent more than US$ 1.4 billion on the development of the country’s food processing sector, leading to flourishing of more than 300 food processing companies. A dietary preference for protein-rich foods like meat and fruits is on the rise in the country and is expected to continue to rise until 2019. 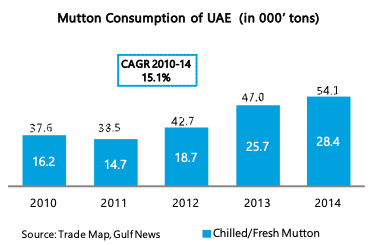 Mutton consumption in the UAE has been rising at nearly 10% since 2010, while the nationals have a preference for beef, the demand for meat is driven mainly by the expats population. It is estimated that the consumers of lamb/goat (mutton) belong to a higher income category. Since 2010, consumption of chilled/fresh meat has been increasing and in 2014, consumption of fresh mutton accounted for 52.4% of the total mutton consumed, with an overall (Frozen and Fresh) CAGR of 9.5%. According to the ministry of foreign trade, the per capita meat consumption in the UAE was 85.14 kg, which was more than three times the amount in the major five importing countries, and 18 times more than the world average. Further, it was also reported by a survey that out of the total per capita income, 14.2% was allocated to food consumption per month and majority of it was on the meat consumption. Poultry meat contributed 48.9% to the per capita meat consumption, followed by lamb and goat (13.5%), beef (12.1%), and other meats. As compared to the other food categories, growth in the consumption of meat and fruits had been remarkable. 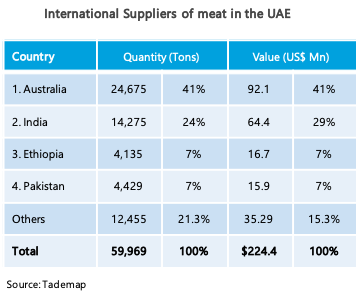 The share of local meat (goat, sheep and lamb) is estimated to be about one-third of the UAE market for meat and livestock products. It is also believed that most of the domestic meat produced does not even enter the commercial supply chain in the market. Due to this, the demand for the import of fresh meat is very high and nearly 95% of the meat consumed in the UAE market is imported from other countries in the world.  The boom in the construction sector has also been identified as the major driver for boosting the demand for the fresh meat due to the fact that the size of the labor force would increase. Moreover, with economic growth and rising per capita, the tendency to consume mutton has increased. 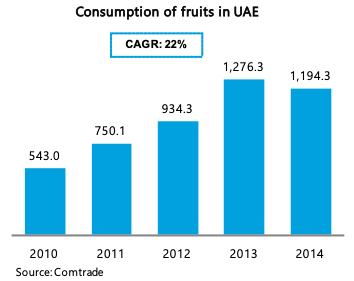 According to a survey conducted by Dubai household Health, in 2009, of the 5000 households surveyed, 59% did not consume sufficient quantity of fruits, but few years later due to the measures took by the government to build up awareness for healthy eating and the greater penetration of literacy among the UAE population, the trend was seen changing. Consumption of fruits increased at a CAGR of 22% from 2010-14 and in 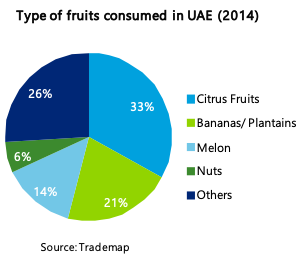 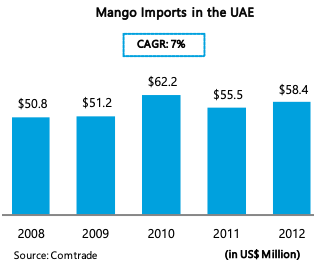 Imports of mangoes have increased at 7% during 2008-12. The most famous variety of mango is Alfonso, from India, followed by Sindhri and Chaunsa from Pakistan. Kenya also supplies small quantities of Kent mangoes, which are larger-sized varieties. The demand for not only just the fruit, but also for the processed mango products has been increasing in the UAE. The processed mango products include mango juice, pickles, chutney, pulp, paste, puree, dried mango and frozen sliced mango. India occupies the largest share of 58% in exporting mangoes to the UAE, followed by Pakistan and Egypt. 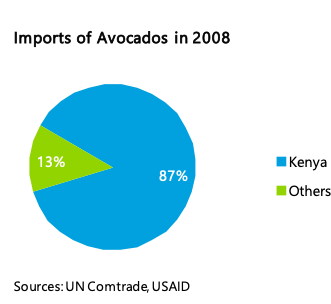 Kenya is the major supplier of Avocados in the UAE fruit market, with a share of over 80%. Consumption of avocados has grown at 25% annually since 2008-12. It has been reported that avocadoes are generally sourced from Kenya, with Australia being a small secondary supplier. The type of variety that Kenya supplies is called as Fuerte, while Australia supplies the Hass variety. As per the study done by hypermarkets in the UAE, the Fuerte variety is the fast moving type of avocado as the other varieties are very expensive for the consumers. 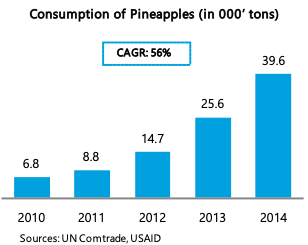 Key Drivers of Consumption of Fruits

Growing Health Conciousness – There has been enhanced awareness regarding the incidence of various diseases, and this has created consciousness among the people to shift towards healthy eating pattern, thereby adding fruits in their menu. Consumption of soft drinks in the UAE, especially of fruit juices, has witnessed significant growth in 2011 and 2012, and the trend is likely to become stronger in the future.

People in the UAE have developed an inclination towards organic food as they are placing more value on the products that are indicative of healthy lifestyle. The quickly rushing out of stocks of the organic food makers has been signaling towards the rising demand and greater acceptance for the organic foods markets.

Rising Global Food Prices – The rising global prices due to inflation will tend to have deeper impacts in the UAE market as they are mostly price-takers due to high demand for imports. In this case, suppliers cannot pass on the price rise to the consumers and thus will have to restrict the supply.

In-house Technological Solutions – Panasonic has built electronically-controlled greenhouses and promises eight harvests instead of the usual five in a reegion that gets impacted from heat during the summers. This advancement can lead to lesser demand for the imports.

Local Organic Farming – The UAE has been investing in the development of organic farms due to the increasing awarness about benefits of consuming organic products. The country’s largest genuine farmers’ market has opened in Dubai, and there are organic supermarkets like organic foods and café in Dubai and Abu Dhabi.

Growth rates of fresh fruits remain high in 2015 due to the increasing influx of expats, higher disposable income, and increasing health awareness among the UAE population. The Arab and South-Asian expats are bringing their families, which is boosting the demand for fresh fruits through retail. To boost domestic mutton production by the 2016 end, the UAE is constructing small facilities. However, the mutton market of the UAE is facing competition from Saudi Arabia and Oman, which are exporting fresh mutton to the country. Moreover, due to the global and regional developments future challenges are lined up in the post-recession period and the consistent support of the government is needed to cope up with the situation and let the demand be positively supported by the supply.