Home/Blog/Opportunities in the Oman Insurance Market, 2019

Oman insurance sector is a highly competitive market with 20 players vying for a market share. It is dominated by the non-life segment with over 88% share of gross premiums in 2018. This is expected to be mainly driven by the rising trend of ‘Omanisation’ and economic and population growth.

In 2018, about 68% of Oman’s population constituted the working age group of 21–60 years. This, coupled with low existing insurance penetration (1.5%), provide substantial growth opportunities. Moderate economic growth, government’s initiative and hard push towards Omanisation for increased employment of nationals and low insurance penetration are likely to boost the insurance business.

Dhofar and Muscat have the highest household monthly income; also, a majority population resides in these two governorates and Al Batinah. There is a huge potential for insurance companies and their products to cater to customers in this region.

Components of the insurance market in Oman 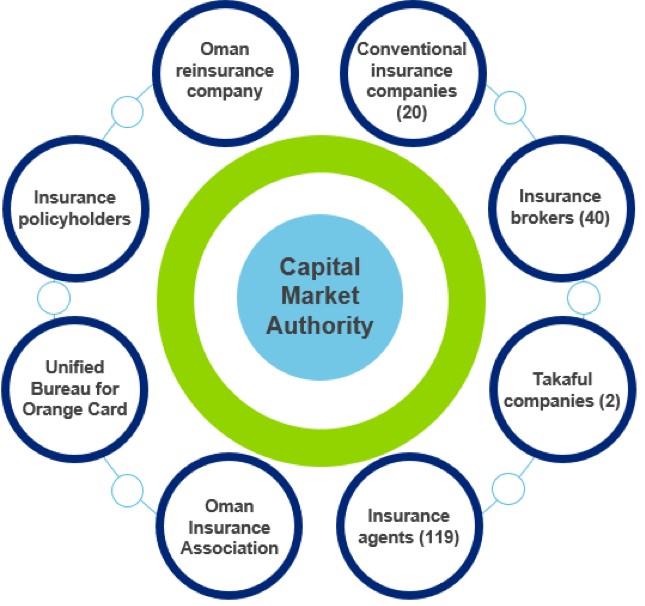 The country’s gross written premiums grew moderately during 2016–2018; however, the claim amount surged in 2018 as a result cyclone Mekunu. Over 2016–2018, local insurance companies posted lower retention ratio than foreign peers. This indicates that foreign companies were retaining higher risks internally compared with the local companies.

While the stiff competition has pressurised margins of insurance companies, it has not resulted in product or service innovation. Unlike their counterparts worldwide, a majority of insurance companies in Oman are still to adopt technology. The industry also faces shortage of local talent due to lack of related courses in local universities.

The Oman insurance market, though small, is likely to be driven by economic growth of the country and the push towards Omanisation which will result in increased employment of local population in both government and private sectors.

With government focus on developing the SME sector (with funds, skill and awareness building programs), the segment is expected to boom. This is likely to fuel the demand for specific categories of insurance such as medical, property and group life.

Oman insurance market – No. of policies by insurance company and type:

With the onset of new mandatory health insurance regulations from 2020, the health insurance segment (~1% of market as of 2018) is expected to grow rapidly in the medium term. National insurance companies including Dhofar and National Life are market leaders in terms of the number of policies issued. Local companies account for ~78% of the total policies issued in the country and the remaining share is held by foreign companies. 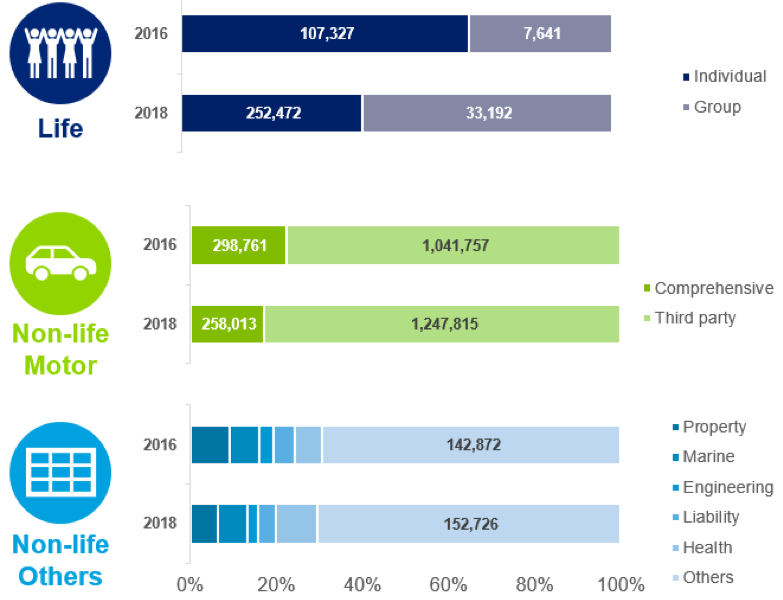 Insurance companies are leveraging multiple channels to boost sales. However, they often have to work towards minimizing channel conflicts. Fastest-growing channels include bancassurance, affinity and retail partners. Web and mobile channels are also growing in importance; however, these are yet to gain popularity in countries such as Oman. While ~80% population in Oman actively uses the Internet, not a single insurance company in Oman has been featured in the list of 100 most followed pages on Facebook and twitter.

Total claims in Oman market surged by 26% in 2018 over 2017 due to rise in claims post cyclone Mekunu. This surge primarily originated from the property insurance segment as customers claimed damages caused by the cyclone. The health insurance segment also witnessed a similar trend. Claims from other segments remained stable between 2016 and 2018. 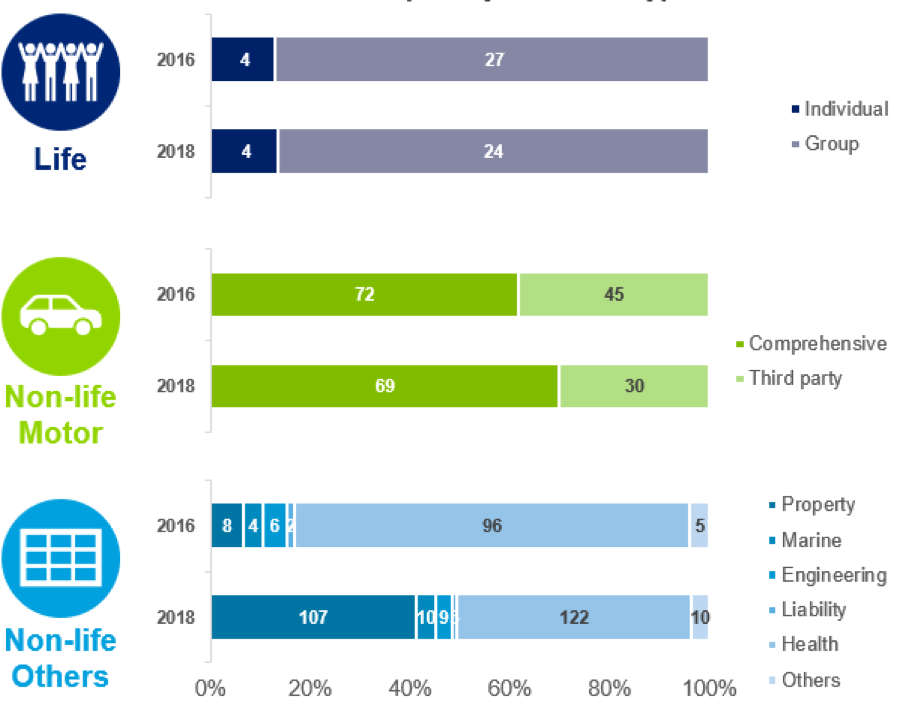 Between 2016 and 2018, Oman Qatar Insurance registered rise in gross written premium at a CAGR of 15% and net profit at 26% despite multiple challenges–such as exposure to catastrophic risk, reduction in investment income and increased administrative cost. They are expected to grow further as the company will focus on development of more profitable direct retail business through branches and online platform. National Life and General Insurance is the top insurer in Oman with gross written premium growing at a CAGR of 13% and net profit at 23% between 2016 and 2018. Expansion of business into new geographic locations, technological development and cost reduction initiatives through increased analytics and automation are the key drivers for growth in premiums and profits. 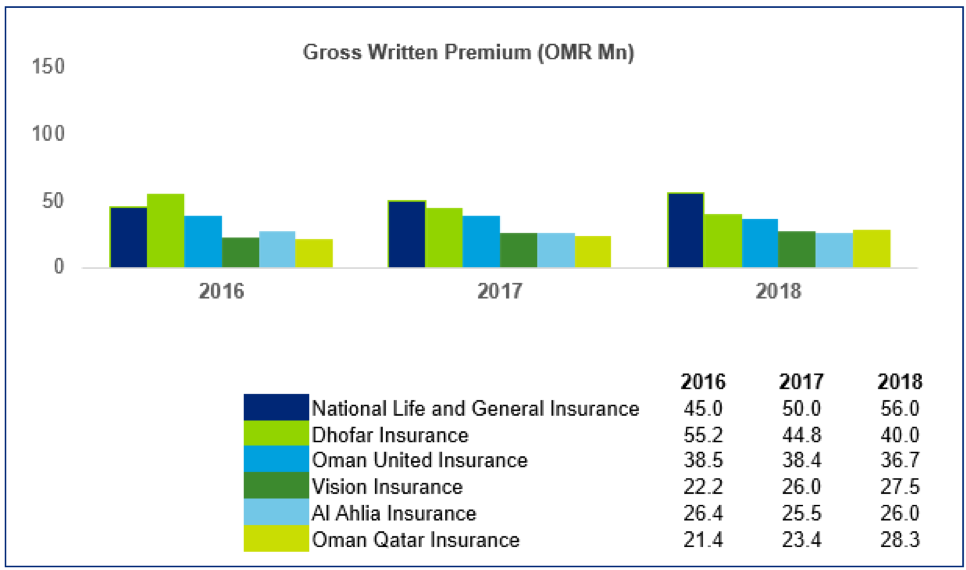 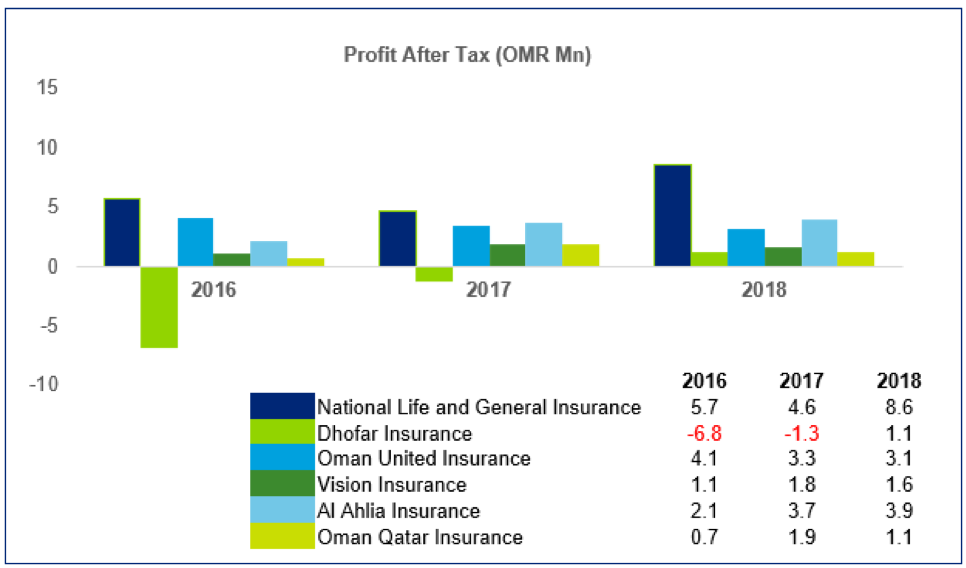 Market drivers of the Omani Insurance market includes the following:

Favourable demographics leading to increase in working class population aged between 20 and 60 years (grew at a CAGR of 8.5% during 2011–2018) is expected result in increasing demand for insurance products; This will be further supported by the government’s Omanisation policies.

Regulatory developments such as the mandatory health insurance policy for expat employees (to be implemented in 2020) are expected to further boost industry growth. Existing health insurance coverage includes about 469,000 employees in the private sector, and this number is likely to surpass 2 million if expats are included.

Key challenges include the following:

A majority of insurance companies are still testing waters in terms of using technology to offer insurance products and services. Most players are leveraging social media and OTT platforms such as WhatsApp to connect with customers for marketing and promotions and/or claims settlement.

While insurance companies worldwide have started leveraging digital technologies and data analytics to offer the right product to the right customer, insurance companies in Oman lag in technology adaption. This is primarily due to the cultural force of Omanis where they prefer going out and buying rather than shopping online. A few companies offer website-based buying/renewal facilities and mobile applications, but those solutions are in rudimentary stages and lack sophistication.

With lowest insurance penetration in the country, the players are currently focused on gaining market share as opposed to retaining customers. This has led to poor quality of customer service and thus, low customer loyalty.

The industry also faces challenges due to lack of awareness about insurance benefits among the general population. This leads to purchase of minimalistic plans that fulfill regulatory requirements (such as third-party insurance in the motor segment). These plans are usually a low-margin business and thus, impede growth of insurance players.

Overall, we believe that the Oman Insurance sector is a highly competitive market. The contribution of the insurance sector to Oman’s GDP is expected to increase in future on the back of growing population and new reforms.

This website uses cookies to improve your experience while you navigate through the website. Out of these cookies, the cookies that are categorized as necessary are stored on your browser as they are essential for the working of basic functionalities of the website. We also use third-party cookies that help us analyze and understand how you use this website. These cookies will be stored in your browser only with your consent. You also have the option to opt-out of these cookies. But opting out of some of these cookies may have an effect on your browsing experience.
Necessary Always Enabled
Necessary cookies are absolutely essential for the website to function properly. This category only includes cookies that ensures basic functionalities and security features of the website. These cookies do not store any personal information.
Non-necessary
Any cookies that may not be particularly necessary for the website to function and is used specifically to collect user personal data via analytics, ads, other embedded contents are termed as non-necessary cookies. It is mandatory to procure user consent prior to running these cookies on your website.
SAVE & ACCEPT